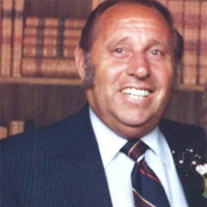 William R. "Bro. Bill" Hardin, 91 of Dayton, passed away on Sunday, March 9, 2014 in Liberty, Texas. He was born on April 29, 1922 in Springfield, Kentucky to parents, William Raymond Hardin and Iva Rae Durr Hardin. He is preceded in death by his parents; wife, Joyce Hardin; son, Daniel Gene Hardin; brothers Leon Hardin and Eugene Hardin and sister, Edith Brentzel. He is survived by his children, Rev. Wayne Hardin and wife Donna, Brenda Smith and husband Curtis, Nola Loving Weaver, Jimmy Hardin and wife Pam, and Randy Hardin; grandchildren, Kathy Barber and husband Jerry, Danny "Bubba" Hardin, Billy Hardin, Sherry Hardin, Jennifer Hardin, Christy Oliver and husband, Jason, Raymond Hardin and wife Amy, Stacy Cline-Sanders and husband Willie, Penny E. Proske and husband PJ, James "Bo" Hardin and fiancée Cassie Cavazos, Laura Hardin and Chad Bays, Jason Hardin, Courtney Durham and husband Clay, Randa Nibert and husband Travis, Robert Rose, Christopher Rose and Richard Weaver; great-grandchildren, Joshua Barber, Danielle Hardin, Ashley Hardin, Amber Hardin, Brittany Tenorio, Craig Tenorio, Tristan Oliver, Gage Oliver, Ashton Oliver, Lucas Hardin, Cason Hardin, Ashley Lloyd and husband Shelby, Brandon Rainwater and wife Lauren, Zachary Emerson, Zayne Emerson, Anthony Ramirez, Caleb Cline, Landyn Cline, Jules Sanders, Evan Sanders, Ryan Hardin, Ryleigh Nibert, Karleigh Nibert, and Ethan Durham; great-great-grandchildren, Maleigha and Kinsley Rainwater; brothers, Joseph Hardin and wife Loraine and Pierce Hardin and wife JoAnn and numerous nieces, nephews and other relatives and many friends. Bro. Bill and his wife Joyce pastored the Community Baptist Church in Humble from around 1959 until 1965 when they moved to Houston and pastored the Hartley Street Baptist Church from 1965 until retirement in 1996. He surrendered to preach the gospel when he was a young man in Springfield, KY. and was proud that he had served the Lord since he was a young boy of ten years of age. He joined the United States Army at the outbreak of World War II and upon completion of his duty, he joined the United States Marine Corps. He was a house builder and brick mason by trade for most of his life, a trade he had learned from his father. He was very, very faithful to the church and was extremely saddened when the time came to retire. He continued telling everyone that crossed his path about Jesus and his love, even after suffering a debilitating stroke which eventually led to his being placed in a nursing facility. A very grateful patient, we would always hear him thank his caregivers even when they caused him pain to make him feel better. He was known as "Pop" to his many grandchildren and great-grandchildren, Dad to his children and Bro. Bill by so many that he had pastored, baptized and all who knew and loved him. The family will receive friends on Tuesday, March 11, 2014 from 1 o'clock in the afternoon until 8 o'clock in the evening at Grace Community Baptist Church, 8073 FM 1960, Dayton, TX, 77535. Funeral Services will be held on Wednesday, March 12, 2014 at 11 o'clock in the morning at Grace Community Baptist with his son, Rev. Wayne Hardin officiating. Bro. Bill Hardin will be laid to rest beside his wife Joyce, at Rosewood Cemetery in Humble, TX. His family would treasure your thoughts and memories of him and encourage you to leave those messages here.

William R. "Bro. Bill" Hardin, 91 of Dayton, passed away on Sunday, March 9, 2014 in Liberty, Texas. He was born on April 29, 1922 in Springfield, Kentucky to parents, William Raymond Hardin and Iva Rae Durr Hardin. He is preceded in death... View Obituary & Service Information

The family of William R. "Bro. Bill" Hardin created this Life Tributes page to make it easy to share your memories.

Send flowers to the Hardin family.