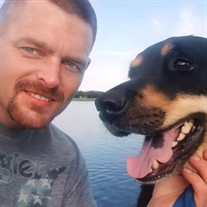 Cain, Sean Lee, age 35, passed away unexpectedly at his home in Katy, Texas on 10 November 2021. He was born on 04 September 1986 in Houston, Texas. Sean had an incredible smile that could light up the room. Sean was always the first person to lend a helping hand to anyone in need. He enjoyed hanging out with friends, but especially enjoyed his summers in Monticello, Arkansas with his Aunt Pam and Uncle Mickey Arrington. He loved spending his time at the lake swimming and knee boarding. Sean participated in numerous club athletics while in school and graduated from Taylor High School. Following his graduation in 2005, Sean fulfilled his dream of serving his country and earning the title of Marine. He attended recruit training at Marine Corps Recruit Depot San Diego (MCRDSD) followed by the School of Infantry West at Camp Pendleton, California (SOI-West). While attending SOI, Sean was designated with the Military Occupational Specialty, Machine Gunner (0331). Upon graduating from SOI, Sean was ordered to report to 2d Btn 7th Marines Golf Company WPNS Platoon at Marine Air Ground Combat Center, Twenty-nine Palms, California. During his time there he developed a love for the Marine Corps and his brothers in arms. He participated in two combat deployments, one in support of Operation Iraqi Freedom (Iraq 2007) and the other in support of Operation Enduring Freedom (Afghanistan 2008). After fulfilling his duty to country and corps, Sean attended HVAC school and worked at Cain Mechanical where he enjoyed working with his father Rick Cain. Cpl Sean Cain (USMC) was awarded numerous individual and unit awards while honorably serving his country to include: Navy and Marine Corps Achievement Medal, Good Conduct Medal, National Defense Medal, Iraqi Campaign Medal, Afghanistan Campaign Medal, and Combat Action Ribbons to name a few. Sean is survived by his father Rick Cain (Tina), mother Kimberly Schultz (Eric), his brothers Jason, Brandon, Paul, Adam and Elliott. Also, his grandmother Char Kuhn and many aunts, Uncles, Cousins, friends and Marine brothers. Sean is preceded in death by his grandparents Paul Butler and Norma Warren, Ed and Helen Cain, Joe Kuhn, his uncle Joseph Kuhn and his aunt Paula Moix. MAY THIS MARINE NEVER BE FORGOTTEN

Cain, Sean Lee, age 35, passed away unexpectedly at his home in Katy, Texas on 10 November 2021. He was born on 04 September 1986 in Houston, Texas. Sean had an incredible smile that could light up the room. Sean was always the first person... View Obituary & Service Information

The family of Sean Lee Cain created this Life Tributes page to make it easy to share your memories.

Cain, Sean Lee, age 35, passed away unexpectedly at his home...

Send flowers to the Cain family.