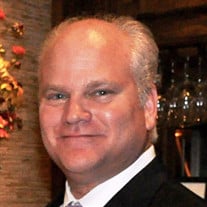 Paul Sidney Nolen, 54 of Houston, Texas, passed away Monday, June 28th. Paul was born on January 5, 1967 in Robstown, Texas to father, Gene Nolen, and mother, Mary Ellen Warren. He graduated from Sharpstown High School in 1985 and attended Ranger Junior College on a track scholarship. Paul served in the United States Navy for 6 years. During that time he was awarded a National Defense Service Medal, Sea Service Deployment Ribbons, Southwest Asia Service Medal (two bronze stars), a Kuwait Liberation Service Medal, a Battle “E” Ribbon, a Navy Unit Commendation, a Good Conduct Award, and a Navy Achievement Medal. Paul’s last duty assignment was on the USS Independence in Yokosuka, Japan. Paul devoted his life to serving others. He was a warranty specialist for several home builders in the Houston area. He was a truck driver for a short period of time but did not like being away from his loved ones. He was a process server for various attorneys both local and out of state. He developed strong relationships with many attorneys and paralegals along the way. He loved animals especially the ones lost or needing rescued. He enjoyed grilling, movies, and traveling with his beloved wife, Vickie. Paul was a very attentive husband, father, and son. He loved them well. This compassionate soul was survived by his wife, Vickie of Houston, TX, son, Luke Nolen of Houston, TX, mother, Mary Ellen Warren of Houston, TX, father, Gene Nolen and his wife Molly of Baytown, Texas, sister, Christine Sheffield and her husband John of Pearland, TX, sister, Cathy Hamilton and her husband Richard of Granger, IN, step-brother, Greg Warren of Ft. Worth, TX, step-children, Ashley Grant and Nicholas Hartley of Houston, TX, mother of his son, Rose Nolen of Houston, TX, and many extended family members and a host of friends who cherish his memory. Funeral services for Paul Nolen will be on Thursday, July 8th at Houston’s First Baptist Church in the chapel. Visitation will be from 10:00-11:00. The service will begin at 11:00 and there will be a reception to follow. He will be interred on Friday, July 9th at Houston National Cemetery receiving full military honors. He will be deeply missed by many… Longing for the day we see him again in heaven. In lieu of flowers, make donations to the SPCA of Houston or other organizations that help care for rescued animals.

The family of Paul Sidney Nolen created this Life Tributes page to make it easy to share your memories.

Send flowers to the Nolen family.