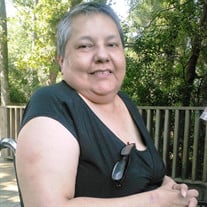 A limb has fallen from the family tree. I keep hearing a voice that says, "Grieve not for me. Remember the best times, the laughter the song. The good life I lived while I was strong. Continue my heritage, I'm counting on you. Keep smiling and surely the sun will shine through. My mind is at ease, my soul is at rest. Remembering all, how I truly was blessed. Continue traditions, no matter how small. Go on with your life, don't just stare at the wall. I miss you all dearly, so keep up your chin. Until the day comes we're together again.” JoAnn Garnier, 60, of Spring, Texas passed away on Thursday, April, 14, 2016 due to complications from her long battle with diabetes. She was born in Bridgeport, Nebraska on June 18, 1955 to John Francis Garnier and Cleo Rae Steele Herrera. JoAnn graduated from Platte Valley Academy in 1974 and graduated with honors from Andrews University in 1978 with a Bachelors of Social Work. Throughout her life, she had multiple careers including administration, self-employment, and caregiver to the elderly and disabled. She was a devoted mother, animal lover, and caregiver and nurturer to all. JoAnn loved unconditionally and never judged anyone. As the oldest of seven children, she was a protector, mentor, advocate, and hero to her younger siblings. Her family admired her strength because no matter what trials and tribulations she faced, she persevered with faith and strength. Family and friends considered her to be a mother figure as she took everyone under her wing and could always be counted on to help those in need. JoAnn had a strong relationship with God and enjoyed reading her daily devotions. She had the corniest jokes, and her smile would always brighten a room. She would often hum or sing around the house. JoAnn had such a vibrant personality and will be sorely missed by all who knew her. JoAnn is survived by daughter Robyn Renee Welsh and her partner Ian Harris; grandson Evan Ray Welsh; her mother Cleo Rae Steele Herrera; her siblings Joe Herrera, Benjamin Herrera and his wife Cynthia Herrera, Sherri Herrera Escobar, Laura Herrera Rodriguez, Frank Herrera Jr. and his partner Sue Pirolo, and Toni Herrera and her husband Steve Shively; fourteen nieces and nephews; and eleven great-nieces and great-nephews. She is preceded in death by her father John Francis Garnier. She is also survived by her two adopted daughters Kimberly Moody and Christie Maybin as well as her adopted grandchildren William Moody, Robert Knox Maybin, and Melinda Maybin. No services will be held, per her wishes. She requested in lieu of flowers that friends and family should donate to any animal shelter in her honor and for everyone to take a moment to hug their loved ones.

A limb has fallen from the family tree. I keep hearing a voice that says, "Grieve not for me. Remember the best times, the laughter the song. The good life I lived while I was strong. Continue my heritage, I'm counting on you. Keep smiling and... View Obituary & Service Information

The family of JoAnn Garnier created this Life Tributes page to make it easy to share your memories.

A limb has fallen from the family tree. I keep hearing a voice...

Send flowers to the Garnier family.