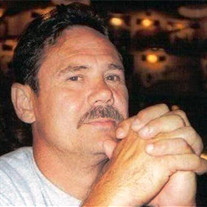 James David Todd, 60, of Humble, TX, passed away on Thursday, April 3, 2014 in Houston, TX. He was born on June 26, 1953 in Freeport, TX to his parents, O.C. and Lois Todd. He is preceded in death by his parents and sisters, Randa Moody and Vickie Crenshaw. He is survived by his wife, Donna Cartwright Todd; his daughters, Deanna Todd-Marquez and husband Albert, Jennifer Soto and husband Joe; grand-children, Breanna Todd and fiancée Toby Canning, Jace Soto, Colby Marquez, Ethan Marquez, and Jaden Soto, and other family and friends. James surrendered his life to Jesus Christ in 1992 at which point he was able to move forward, leading his family and living his life as a testament to God's healing. He was a person that appreciated the simple things in life. Just before becoming ill and forced to retire, James was a delivery driver at Ferguson Enterprises for 10 yrs and took great pride in the way his truck was loaded and secured. Many times just loading the truck himself to know that it was done right! He was a man of many talents and possessed some great abilities to get things done. He was a man that really did enjoy working. James was an excellent pool player & won many trophies playing in tournaments with his friends. He enjoyed yard work and taking care of his home, watching TV - game shows (Wheel of Fortune, Jeopardy and Millionaire), Westerns and playing computer games. James was a wonderful husband, father and grandfather as well as a great friend to many. His family will receive friends on Saturday, April 12, 2014 from 1 o’clock in the afternoon until 3 o’clock. Funeral Services will begin at 3 o’clock in the afternoon at the church with the Rev. Wayne Hardin officiating. He truly loved Jesus and is now spending his days in His glory... In all your ways acknowledge him, and he will make your paths straight. Proverbs 3:6

James David Todd, 60, of Humble, TX, passed away on Thursday, April 3, 2014 in Houston, TX. He was born on June 26, 1953 in Freeport, TX to his parents, O.C. and Lois Todd. He is preceded in death by his parents and sisters, Randa Moody and... View Obituary & Service Information

The family of James David Todd created this Life Tributes page to make it easy to share your memories.

Send flowers to the Todd family.