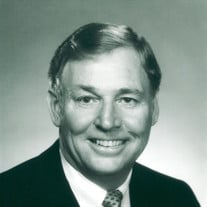 James Carter Cooper died unexpectedly on the evening of Tuesday, November 20. James was born on June 1, 1935, in Richland, Texas, to J.L. “Pat” and Lillian Cooper. He grew up ranching in Streetman, Texas, where he served as the First Baptist Church’s youngest deacon while barely a teen. He graduated from Wortham High School in 1952. He was a proud member of the Texas A&M Corps, graduating with a BA in Economics in 1956 and a MS in Economics in 1958. He served as a Captain in the Army Reserves from 1956-64. James married the love of his life, Llewellyn (Watson) Cooper, in 1958. They began their married life in Champaign-Urbana, Illinois, where James completed his PhD in Economics in 1966 while teaching at the University of Illinois. Relocating their young family to New York, James spent four years as a Monetary Economist with the Federal Reserve Bank of New York, followed by eight years with the Irving Trust Co. on Wall Street as Vice President and Director of Economic Research and Planning. During that time, he lectured at Stonier Graduate School of Banking and chaired the Commercial Loan Policy Seminar at Columbia University’s Commercial Banking Program at Arden House. His writing on economics was widely published. While working in New York, James and Llewellyn lived in Manhasset with their three children. In 1974, James and Llewellyn happily moved their family back to Texas where James spent the next 12 years at the helm of United Energy Resources, Inc., serving as Executive Vice President, Chief Financial Officer and Director. His involvement in his community extended way beyond the boardroom. His passions included the cultural arts and financial literacy. To those ends, he served as the President of the Houston Grand Opera Board in the 1980s and worked with the Texas Council of Economic Education for more than a decade to bring economics into K-12 classrooms, eventually serving as their President and Director Emeritus. He founded James C. Cooper Inc. in 1986, providing management consulting, financial advisory and investment banking services to companies of all sizes in both the US and Mexico. He and Llewellyn spent many joyful years dedicating the bulk of their time to trips to their ranch and time with their children and grandchildren, all of whom live nearby in Houston. Though he was a longtime member of Tallowood Baptist Church, James’ real sanctuary was his garden and the wide open spaces at the ranch that served as the backdrop for his whole life. James was preceded in death by his parents. He is survived by his wife of 60 years, Llewellyn Cooper; son Carter Cooper and wife Tamela and grandsons Jonathan, Tyler and Jack; son John Cooper and wife Kristi; daughter Catherine King and husband Geoff and grandchildren Cooper, Carter and Charlotte; and his cousin Patricia Henderson of Fairfield, Texas. His family describes him as a devoted husband, father, friend and grandfather. James will be laid to rest in a private family burial at his beloved ranch in Streetman. In lieu of flowers, please donate to your own place of worship, as a way of honoring the important role faith played in James’ life. Friends and loved ones are invited to the visitation and memorial service, both held at Tallowood Baptist Church at 555 Tallowood Road in Houston (77024): Visitation 5-7 p.m. Monday Memorial Service 2 p.m. Tuesday

James Carter Cooper died unexpectedly on the evening of Tuesday, November 20. James was born on June 1, 1935, in Richland, Texas, to J.L. &#8220;Pat&#8221; and Lillian Cooper. He grew up ranching in Streetman, Texas, where he served as the... View Obituary & Service Information

The family of James Carter Cooper created this Life Tributes page to make it easy to share your memories.

James Carter Cooper died unexpectedly on the evening of Tuesday,...

Send flowers to the Cooper family.