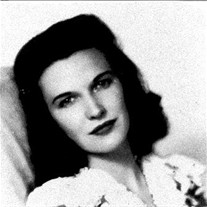 Beverly Faith “Tooks” Thompson, 96 of League City, Texas passed away on Tuesday, October 4, 2016. She was born on July 7, 1920 in Houston, Texas to parents James Smith and Christine Medlenka Smith. It was during WWII when Beverly was working in a bank at Ellington Field in Houston, that she happened one day to be working when a very striking young man named John Charles Thompson, a soldier, came in to cash a check. John was a pilot in the United States Army Air Force during WWII and upon his return from Europe he and Beverly were married in Montgomery Alabama. John served his country for over 28 years in the Air Force retiring in 1970. During his time in the military John earned the nickname, Tommy, and his beautiful bride was nicknamed Tooks. Tommy and Tooks moved from place to place as the military required Tommy in different locations throughout their marriage. They lived in England and Spain before coming back to the United States. Tooks was also a very talented dancer having performed for the public on many different occasions. During their time traveling around the globe while in the military, Tommy and Tooks were blessed with three children. Beverly was fortunate to have had the opportunity to become a stay at home mother while rearing their children. She was an accomplished master level rated Bridge Player and played the game she loved well into her nineties. When you played Bridge with her, you always wanted her as your partner thereby locking in an instant win. Tooks is preceded in death by her loving “Tommy”, John Charles Thompson; sisters, Lafluer Smith, Maudie Belle Horsfall and Indabelle Dodgen and her brother, Justin Smith. She is survived by her daughter, Chris Thompson and her husband Dr. Richard Panebianco; sons, Scott Thompson and his wife Jeanette and John Thompson and his wife Nancy; grandchildren, Jace Panebianco, Dr. Nova Panebianco, Sadie Thompson, Richie Thompson and Nellie Thompson; six great-grandchildren, and numerous nieces, nephews and other relatives and friends. Beverly Faith "Tooks” Thompson will be laid to rest next to her beloved Tommy at Houston National Cemetery in Houston, Texas.

Beverly Faith &#8220;Tooks&#8221; Thompson, 96 of League City, Texas passed away on Tuesday, October 4, 2016. She was born on July 7, 1920 in Houston, Texas to parents James Smith and Christine Medlenka Smith. It was during WWII when Beverly... View Obituary & Service Information

The family of Beverly "Tooks" Faith Thompson created this Life Tributes page to make it easy to share your memories.

Send flowers to the Thompson family.